How we developed a system for collecting data on local elections

Since 2015, the Ukrainian Center for Social Data has purposefully worked to expand and simplify access to local election data, including the development of a system for collecting, storing and publishing the most detailed data. The “TEC e-cabinet”, which we created and tested with the support of the OSCE in 2019, may form the basis of a new system for administering local elections across the country.

Historically, local elections have been much less transparent than presidential or parliamentary elections. There is no unified system for collecting and publishing local election data.

Only some TECs (territorial election commissions responsible for organizing local elections for oblast, rayon, city, town and village councils, city, village, town mayors, village elders) have their pages on City Council websites. The data there are often incomplete. It is important to understand that there are 10 619 TECs in Ukraine. Some of them still write their acts by hand.

The Central Election Commission did not oversee local elections at all until 2010. In 2015 the CEC began publishing significantly more data on their website. But detailed data, including the results from the polling stations and constituencies, are still missing. Though since October 2015 TECs of various levels have organized more than 25 000 local elections (and formed almost 170,000 precincts of various levels).

Since 2015 the Ukrainian Center for Social Data has purposefully worked to create a system that would help to expand and simplify access to local election data, including the creation of a system for collecting, storing and publishing the most detailed data.

In 2015  a completely new system of local elections was used in Ukraine. We tried to understand how it works and explain it to others by modeling it using real data. The elections confirmed our predictions, and we were able to see several deputies (council members) elected from one constituency, and constituencies without deputies, and candidates who received the most votes in the constituency, but did not become deputies, and so on.

At the same time, we developed and launched a system of public TEC websites. The platform for collecting, systematizing and publishing all possible data and information generated by TECs, as well as for public transparent parallel vote counting. Thus, the vybir.info platform contained data on the parties nominating their candidates, on the candidates themselves, interactive maps of constituencies and polling stations, and detailed election results. 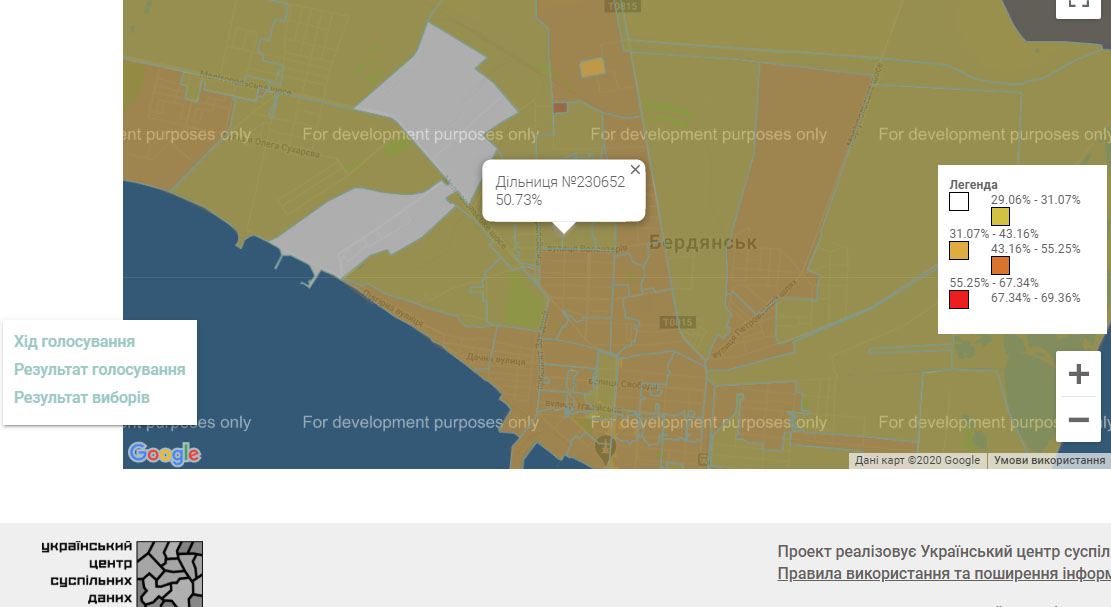 The system of public parallel counting of votes gave parties and candidates the opportunity to control each other, to compete with each other with the help of detailed data on voting results.

The vybir.info platform operated in seven cities in eastern Ukraine (initially in Berdyansk, Zaporizhia Oblast, Kramatorsk and Slovyansk, Donetsk Oblast, and later in Dnipro, Druzhkivka, Mariupol, and Krasnoarmiysk).
The results of the elections are now available at the link.

This tool has helped to restore trust in the election results. It has helped  to protect candidates from possible manipulation or accusations of manipulation. Thus, the mayor of Berdyansk, having lost elections, recognized it by having published detailed data on polling stations on the vybir.info platform. At the same time, in Kramatorsk, in the second round of the mayoral election, an attempt to falsify the election was prevented by publishing detailed data up to the polling station level.

The vybir.info platform was created as part of the Transparent Local Elections 2015 project, with the support of the United States Agency for International Development (USAID) and the Ukrainian Public Confidence Building Initiative (UCBI).

Even minor data, such as the information that the local elections actually took place, is not fully accessible on the CEC website. That is why we created the site “Local elections in territorial communities” – http://info-vybory.in.ua.

The website visualizes information about where, when, and which elections took place or will take place in the territorial communities of Ukraine. Among other it shows the dynamics of the process of uniting territorial communities. To do this, we collected, processed, formatted data on local elections in all communities of Ukraine, and combined them with a GIS system that allows anyone to find easily any community or town in Ukraine, and get information about local elections. 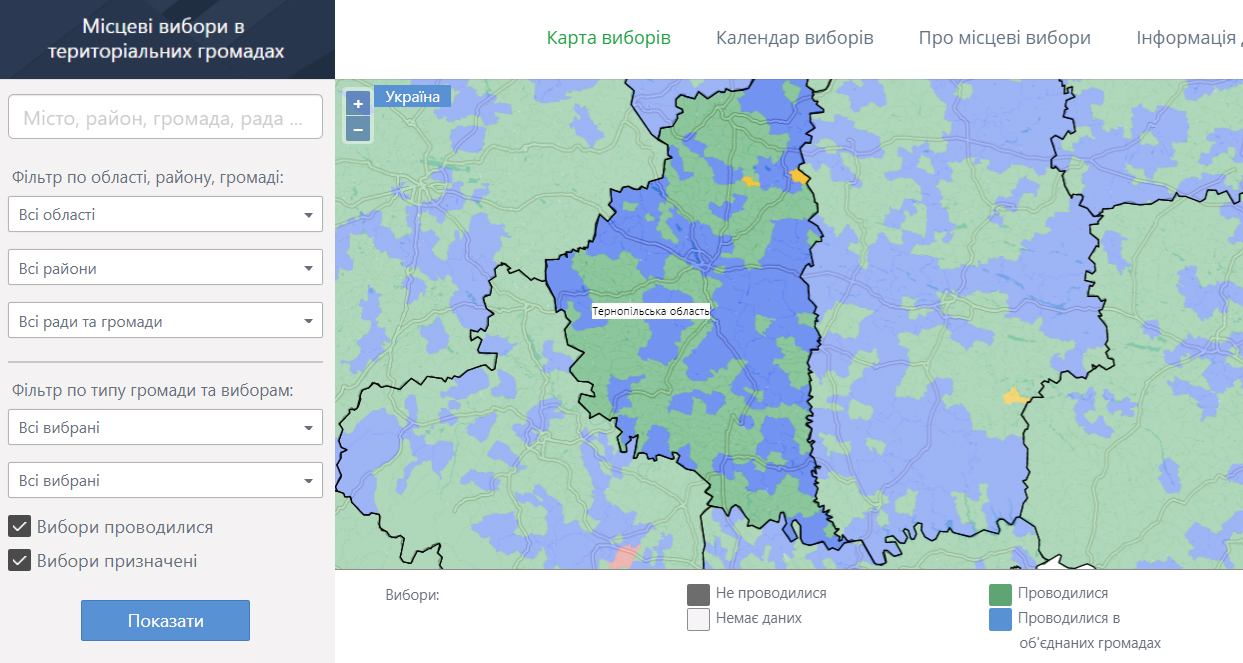 The information is based on data from the Central Election Commission and is updated as elections are scheduled and conducted. The navigation system on the website is multidimensional and as clear and intuitive as possible.

The Local Elections in Territorial Communities website was developed as part of the project “Capacity Building in Electoral Training and Voter Awareness” implemented by the OSCE Project Co-ordinator in Ukraine in cooperation and at the request of the Central Election Commission with the support of the Canadian Ministry of Foreign Affairs Trade and Development, the Norwegian Ministry of Foreign Affairs and the Government of the Kingdom of Denmark.

Given that there is no unified electronic system for more than 10,000 TECs which would enable the collection of data on local elections we decided to create one.

Thus, during 2019 the Ukrainian Center for Social Data, with the support of the OSCE, developed a model web resource for territorial election commissions. The TEC model web resource consists of an open website for public display of information on local elections (https://tvk2019.org) and an internal part, which is an election management system for the respective territory with the help of the “TEC Electronic Cabinet”.

The web resource helps to standardize the information and data flows on local elections, to automatу the election procedures (templates for standard documents and reports, creation of constituencies, ballots, etc.), to simplify TECs election information management, and publication of election data on TEC websites.

The web resource is a data management system throughout the election cycle:

Some of the data entered into the system is automatically published on the “external” public site of a particular TEC.

Below you can find a presentation of the web resource.

The TEC model web resource was developed within the project “Improving Cyber Security and Transparency of Election Processes in Ukraine” implemented by the Central Election Commission together with the OSCE Project Coordinator in Ukraine with the financial support of the US Mission to the OSCE, the Permanent Mission of the Slovak Republic to the OSCE and the Norwegian Ministry of Foreign Affairs.

While in 2015 the newly established Ukrainian Center for Social Data just started to collect detailed data in the format of a “public TEC site”, now, in 2020, the web resource for TECs developed by us may form the basis of a new system for administering local elections all over the country.