They vote as the country: swing communities and electoral polarization

Polarization has always been a distinguishing feature of the Ukrainian elections; people voted en masse for different candidates in the East and in the West. It’s not a geographic characteristic unique to Ukraine; you can compare it to election results in neighboring Poland. At the same time national results in Ukraine were often close to 50/50 (especially in  2004 and 2010).

In order to show that electoral division in Ukraine we developed an interactive tool together with Ukrainska Pravda within the Electoral memory project. It shows not just numbers of votes given to particular candidates in particular localities, but rather how election results in communities differed from the average Ukrainian results.

The administrative division in Ukraine underwent changes; that’s why we used borders of new Amalgamated Territorial Communities as of 2020 for the map with data consolidation. The old borders of village, town, and city council jurisdiction as of 2014 were used only for Crimea. The first thing you notice is that the 2004 presidential election and parliamentary elections of 2006 and 2007 were the most polarized (we compared results of the first round of the presidential election and a proportional part of the parliamentary elections); while presidential elections of 2014 were the least polarized. 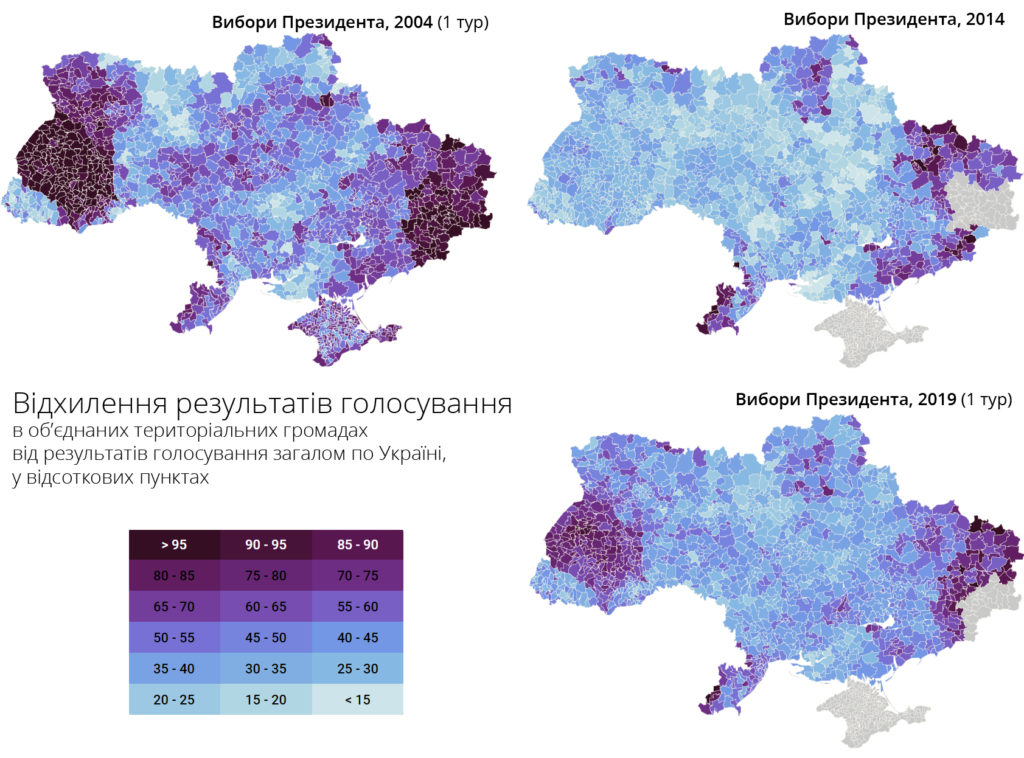 In simple terms, the darker color on the map is the greater is the difference of the locality from the national results. It means that a reasonable part of the voters may not be satisfied with election results in such “darker” regions.

Considering a winner only, there were totally 4 such communities during 9 national elections:

The greatest number of communities who usually voted for winners (7 to 9 coincidences) is in Kherson, Mykolaiv and Kirovohrad oblast. Communities that most of the time voted for candidates losing at the national scale (1 to 3 coincidences) are usually found in Chernihiv, Vinnytsa and Lviv Oblast.

It is also worth mentioning those communities who are close to each other geographically and by other characteristics and may influence each other’s choice.

By other characteristics we mean the level of economic development, employment structure, average age of population, ethnic composition, historical considerations, and some other local factors (a popular local politician, administrative resource and so on).

In the interactive visualization there is a mode Composition of Winners where you can generate maps of communities whose winning candidate coincided with a national winner in 1 to 9 occasions:

It is worth noting that within the new administrative and territorial structure there is no community in Ukraine who had not voted for a winner at least once.

At the same time there are only two communities where national winners won only once; those are the Ponornytsa village community of Novhorod-Siverskyi Rayon in Chernihiv Oblast and Sary-Bash village Council of Pervomaysk Rayon in Crimea. 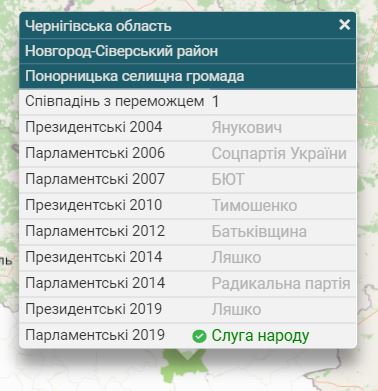 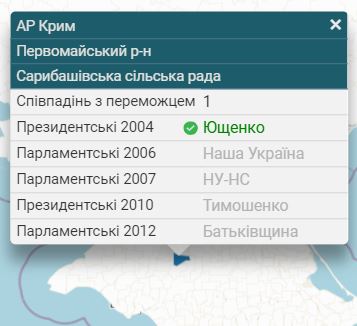 This mode shows the difference between election results at the community and national level in percentage points.  It does not show a leading candidate or party in the community; it shows how different community results of all candidates from the national results are.

If you look at the average results for all elections starting from 2004 you will see that communities whose election results are close to the national ones tend to be in the South, Center and North of Ukraine.

Top-40 communities (marked in red) with the lowest deviation from the national results (average figures for national elections).

Top-10 communities with the lowest deviation (in percentage points):

Novohuivynske Village Community can serve as an example. Their voting results during all elections are surprisingly close to national results.

However, most of the deviations from the national results are found in Donbas:

The majority of communities with the highest deviation from the average Ukrainian results are in temporarily occupied territories of Donetsk and Luhansk oblasts; for them we have only data from 2004-2012 when the highest electoral polarization was noted. 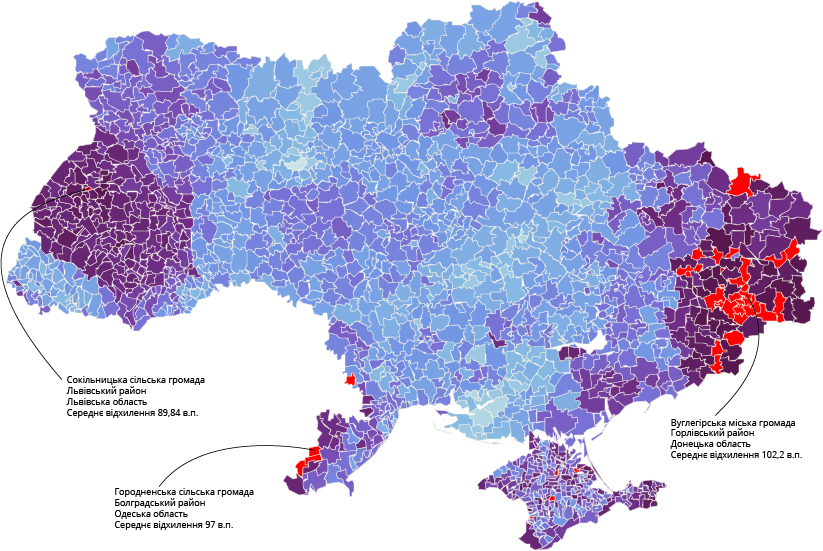 The Svitlodarsk Town Community with the highest deviations is used for comparison:

However, the maximum value (more than 80 percentage points) were noted not only in Donbas but also in Crimea and Odessa Oblast (communities near Transnistria and Moldova) as well as in Galicia (communities in suburbs of Lviv) especially during 2004-2012 elections.

It is possible to find communities where different candidates during different elections won: first Yushchenko, next Yanukovych, and then Tymoshenko.

The Combination Choice Mode allows you to filter communities with a certain combination of winners during different elections.

The average value of deviations from the national results in communities in percentage points.

It is worth mentioning that 2006 and 2014 elections took place after Maydan revolutions; however, in the first case the internal political disputes resulted in even higher electoral polarization then during the Orange Revolution, while in the second case under the threat of the external enemy the electoral polarization was the lowest in history.

Generally, Ukrainian elections in 2004 – 2019 show that some polarization has always been present. There are geographical, historical, economic, and ethnic reasons for that; at the same time those reasons were deliberately used by political forces to increase polarization.

However, if we match the data with the political situation we can see that in hard historical times when there is an external threat Ukrainians are able to compromise and with effective political communication and sustainable economic development all differences become secondary. It all depends whether politicians are able to articulate a common strategic agenda that would make backslide impossible.