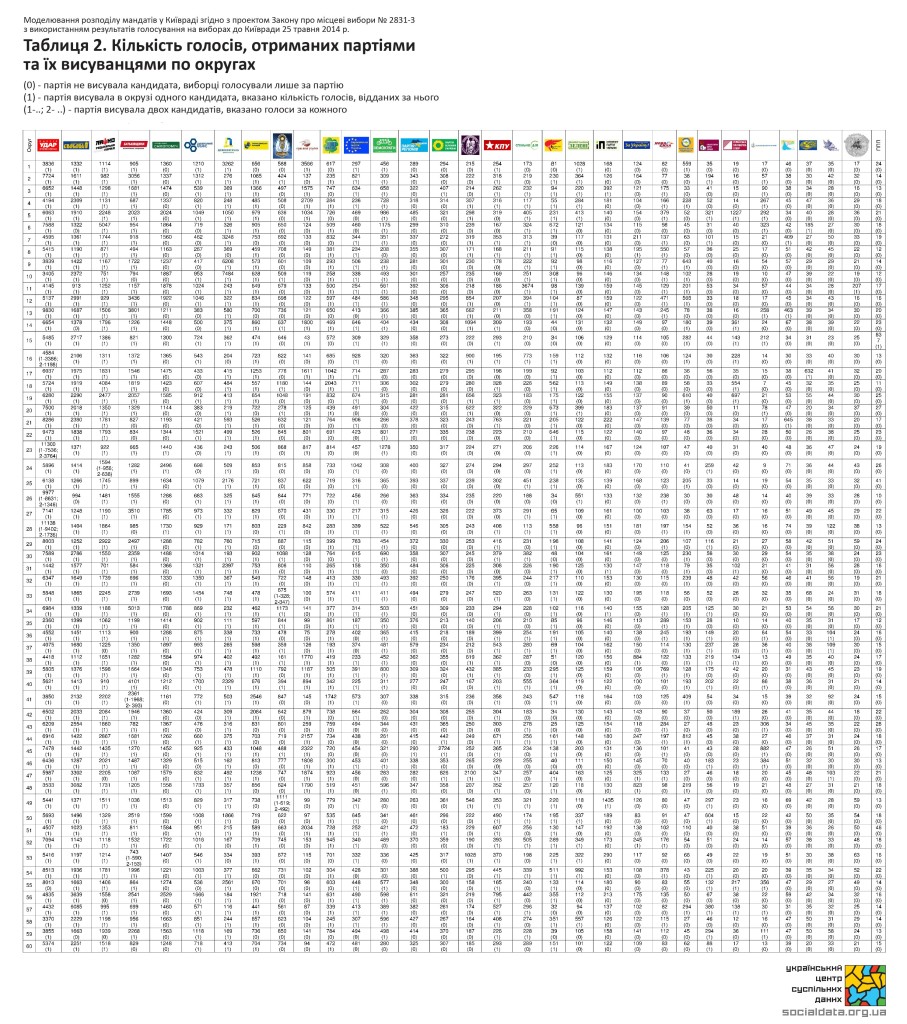 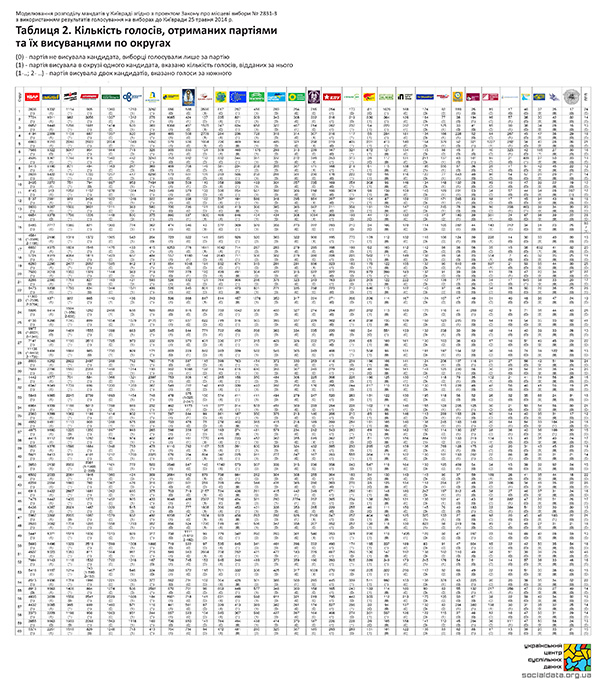 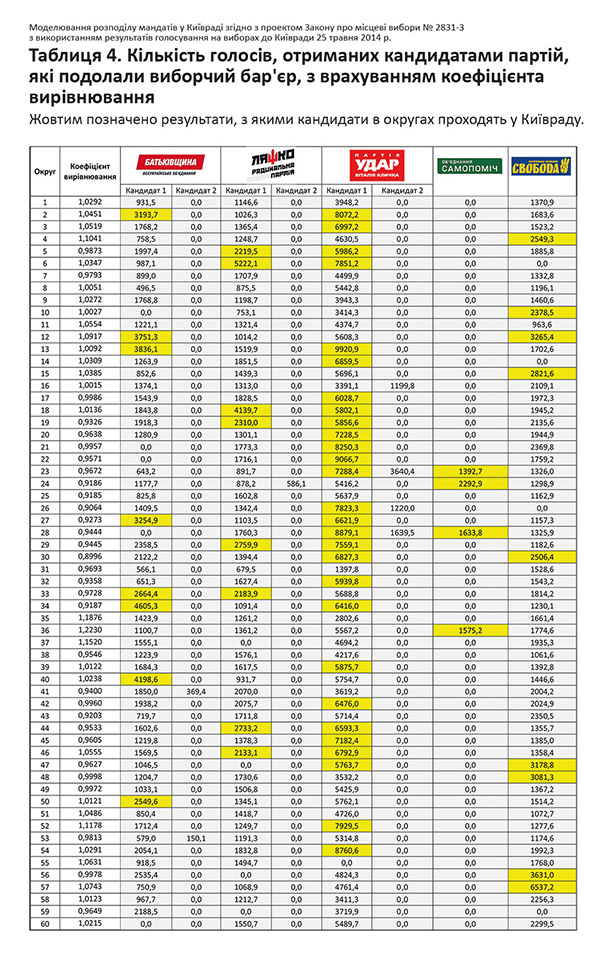 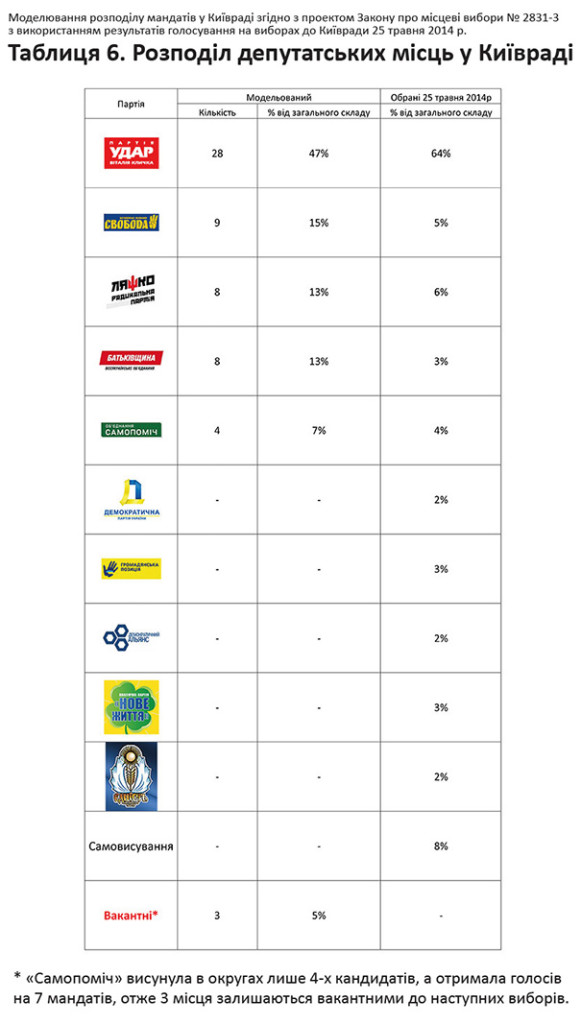 Members of Ukrainian parliament have passed the draft law on local elections (№ 2831-3) in the first reading, which offered a unique system in the world for electing deputies to the municipal, district and regional councils. Since no one anywhere in the world has worked with this kind of electoral system before, the voters, parties, candidates, and, most importantly – workers of election commissions, will have some natural questions – how the mechanism of vote count and establishing elections results, distribution of seats in the council, will be working.

So, using real results of elections to the Kyiv city council of May 25, 2014, we decided to model the mechanism of distribution of seats in the council, and go step by step through the whole process proposed in this innovative draft law. That is, we try to imagine what would be the composition of the current Kyiv city council, if elections were held, votes count, and establishment of results took place according to the bill 2831-3.

Under the bill 2831-3, only parties and candidates, nominated by them, can participate in elections. Party can nominate from 0 to 2 candidates in constituencies (electoral districts). That is voter will get only one ballot for voting, which will be listing political parties that are running, and the names of the candidates whom parties nominated in this constituency. That is, the ballot may list: just the name of the party, one candidate from a party, or even two candidates from the party.

A voter may choose only one option in this one ballot – that is, he/she can simply vote for the party (if it has not nominated a candidate for this constituency), or for the party with a specific candidate.

We reviewed all the stages of the vote count and establishing results, distribution of seats in the councils, step by step. At the same time, we made a number of necessary assumptions. There are 120 deputies in Kyiv city council now: half elected in districts (relative majority system), half came from party lists (proportional system). Under the bill 2831-3, there are plans to reduce the number of deputies there could be 80 deputies in Kyiv, for example. Previously, the SAMOPOMICH party, for example, proposed to reduce the Kyiv city council to 60 members. For convenience, we assume that the city council will have 60 members – since the last elections in Kyiv had 60 majoritarian constituencies, and we have actual data for each district – both for candidates and for parties.

For a start, we have compiled a table, which shows the number of party candidates in the constituency in the last election. For each district, both the party-nominated candidates and self-nominated candidates (members of the same party) were taken into account (in order to simulate situation “2 candidates from one party in one district”). 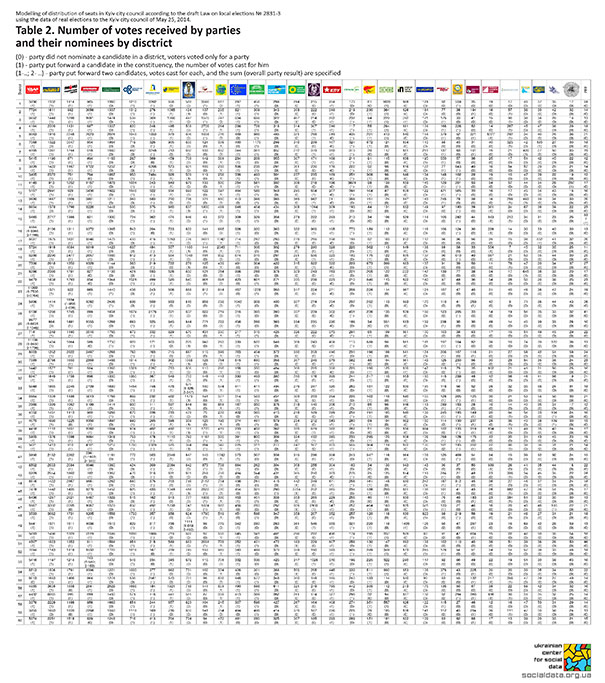 At the next step we must define which parties pass the electoral threshold – 5%. In order to do that, we sum up all the votes the parties and their candidates got in all districts and sort the party list by popularity. Note: only the candidates from parties that passed the 5% barrier could become members of the city council.

The number of votes received by each party is divided by the electoral quota – so learn how many seats in the council each party receives.

Consequently, 60 seats in the Cabinet would be distributed as follows:

Number of seats obtained by:

But it is not that simple! Now you need to find out which candidates and in which specific districts – representatives of the aforementioned parties – will eventually become members of the city council. In order to do this, we have to select 28 candidates from UDAR, 9 members of SVOBODA, 8 members of the Radical Party of Lyashko, 8 – Fatherland and 7 – SAMOPOMICH, who showed the best results in constituencies. However, SAMOMOPOMICH has put forward only 4 candidates, so it would get 4 seats and 3 seats in the city council would remain vacant.

The bill 2831-3 also introduces the term “adjustment coefficient” – to bring districts with the different number of voters to “a common denominator”. In Kyiv, these coefficients are close to 1 (districts have a fairly even number of voters), so the real differences between votes and final results of the candidates are not very significant. 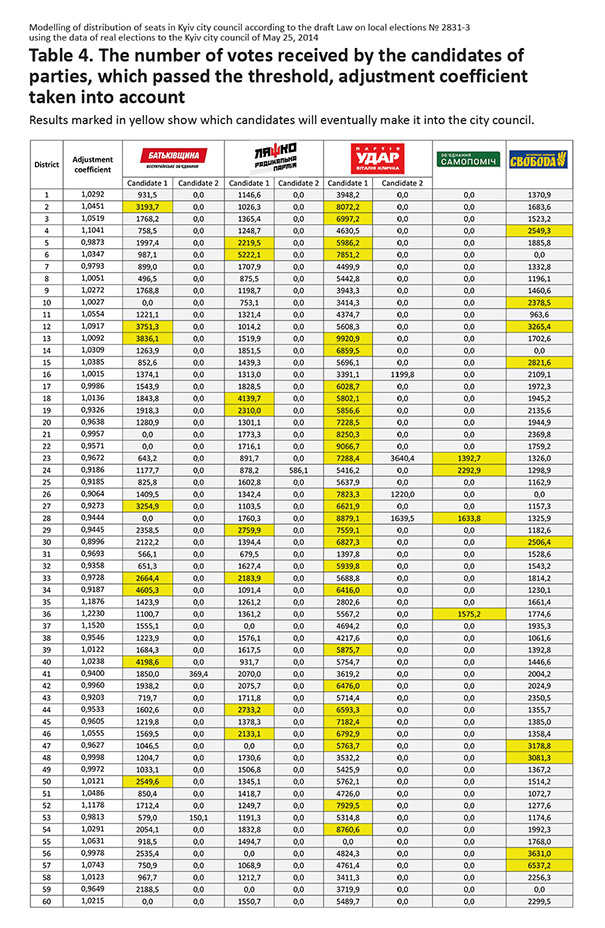 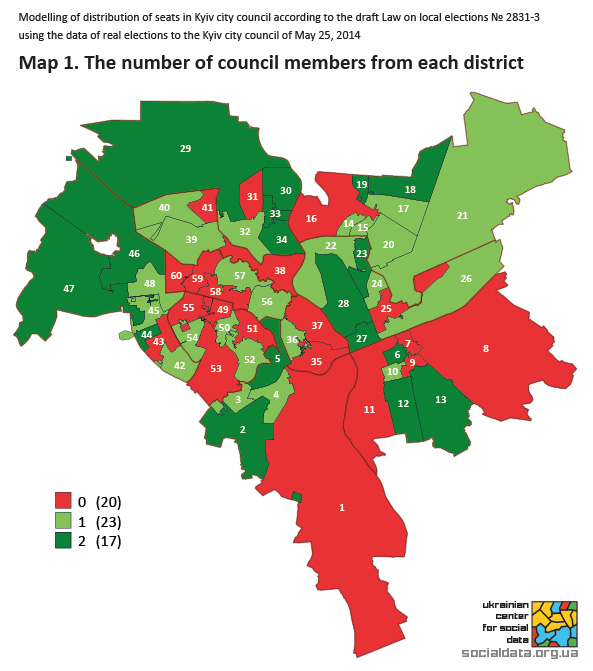 It is also interesting to compare how the real level of the voter support of candidate or political force corresponds with the results of the election (i.e. who eventually would get the mandate) according to the bill 2831-3 – in each district. The following table presents five most popular candidates and parties in the district. Those candidates who will make it into the city council are marked in yellow.

One can see with a naked eye that even a candidate who took a third, and even a fourth place in his district, may become a member of city council under this system (while candidates, who got significantly more votes in the same district, may not). 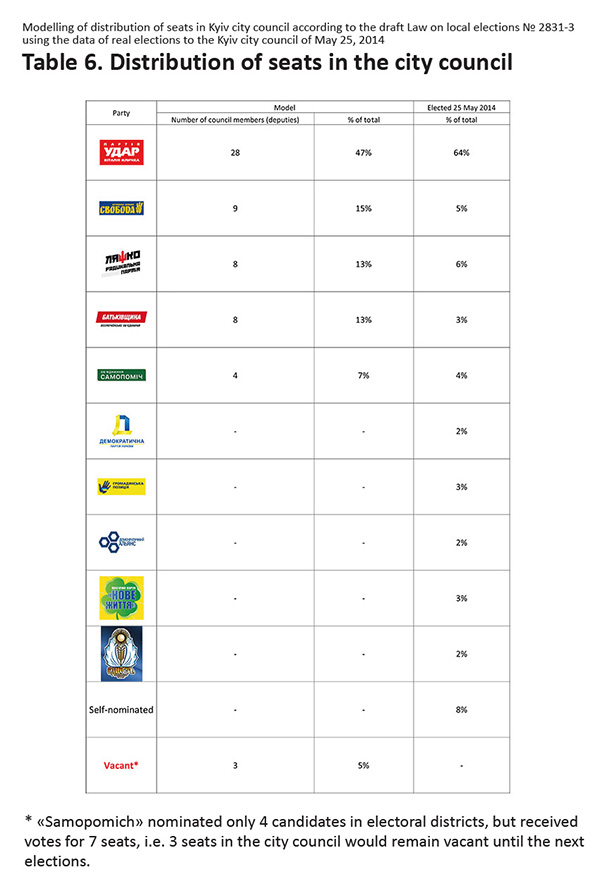 The electoral system, proposed by the bill 2831-3, however unique worldwide, raises some questions about the fairness of the elections. It completely negates the principle of representative democracy, and is even more “unfair” to the voters than the current majority system, under which half of the deputies are elected in the municipal, district and regional councils. Thus, if under the current system of relative majority the candidate may become a deputy receiving 30%, 20%, 15% of the total votes – provided that other candidates got even less, the bill 2831-3 provides that candidate can become a deputy in the district with even scanty support of voters.

Experts of the Ukrainian Center for Social Data forecast that should the law be adopted in current form, the local elections of October 2015 will witness a dramatic increase of time needed for the establishment of election results and the likelihood of errors. We can also expect a wave of mass resentment of voters who could not understand by which “perverse” logic some candidates would perfectly legally (!) become members of local councils.

The most reliable system is the simplest one. We have the impression that the developers of the draft law did not even try to imagine themselves what machine they were designing.