We are pleased to inform that several months of work resulted in launch of the updated web-site “Local elections in territorial communities” – http://info-vybory.in.ua/, which has been developed by Ukrainian Center for Social Data within the framework of “Developing Election Training Capacity and Enhancing Voter Awareness” project, implemented by OSCE project coordinator in collaboration with and by the demand of the Central Election Committee and supported by the Ministry of Foreign Affairs, Trade and Development of Canada, the Norway Ministry of Foreign Affairs and the Government of Denmark. The web-site visualizes information on where, when and how the elections in Ukrainian territorial communities have been or are intended to be held along with, among others, reflecting the temporal dynamics of territorial communities’ unification process.

In the course of decentralization that takes place in Ukraine today, the increasing scope of authority and resources is passed over to the local level – village, town and city councils. Respectively therefore the level of responsibility for deputies and heads of such councils increases.

The process of unification of village, town and city councils takes place – in order to ensure the full-scale use of such resources and authority, to develop into more able and sustainable communities.

Therefore on the web-site http://info-vybory.in.ua/ we are willing to display legible information on those, who are directly responsible for the establishment of comfort citizens’ living conditions – whom by ballot they delegated this authority electing as deputies and heads of village, town and city councils. And also the final stage of community unification process – election of community government bodies.

The information is based upon the data from the Central Election Committee web-site and is updated in the course of appointing and holding of local elections. Site navigation system for one part is multidimensional and for the other part we aimed to make it as visual and intuitive as possible. Despite the website is in Ukrainian only, we think it would be useful to describe it mechanics for English readers. 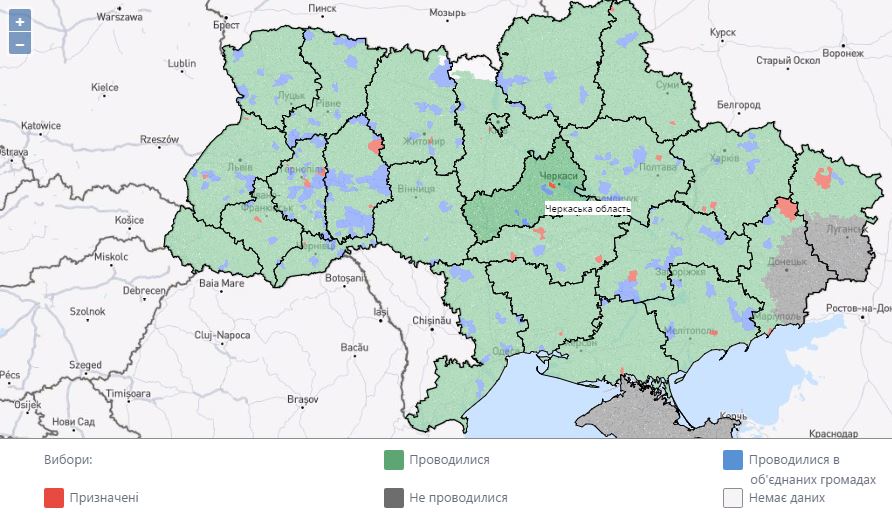 At the first glance, you see the map of Ukraine in different colors displaying communities, which (at the current moment or as of the other date) have held local elections (elections of council and head/mayor) – green, elections took place in united communities (elections of council, head, starostas) – blue, appointed elections (intended to be held) – red, as well as those areas where elections were not conducted (occupied territories and front-line zones) – grey. The map is interactive – you may go to the community of interest by clicking on the map (choosing an oblast first, and then a rayon).

On the left there is a block of filters. It enables to promptly find the community of interest through search or by sequential selection from the list of oblasts, rayons, communities. Besides, the data may be filtered by the type of community (e.g. city or village, “old” or united community), and by the type of elections (elections of heads, deputies, starostas). To apply filters and reload page press “show” button (the blue one). 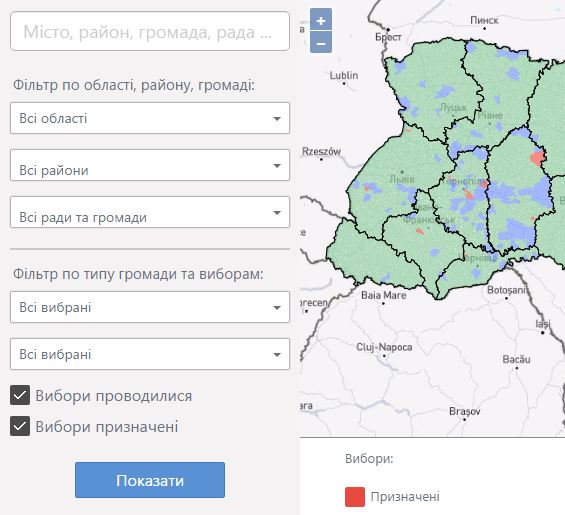 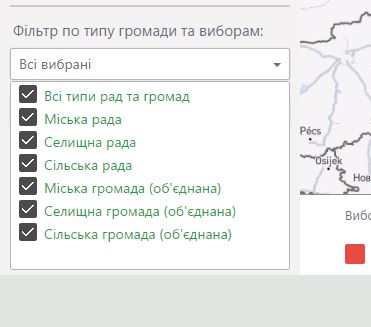 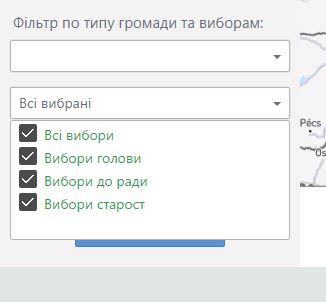 Below you may see the elections calendar – it displays information on future elections in the form of lists, where and which election will be held with the respective date thereof. Similarly, the calendar block offers options to filter information – by regions, by election types and by range of dates. Filters applied to the calendar are automatically applied to the map and vice versa.

Between the calendar and the map there is a “time machine” – slider which allows to select the date as of which the information on the web-site will be displayed – for both elections map and elections calendar. It sets the “current” date for the system. For instance, you may view “past” and “future” elections as of 21 February 2016. Accordingly, elections, already held at the present moment but remaining “future” in relation to 21 February, will be displayed at the map as future ones colored in red. To use “time machine” just drag the slider along the scale and press “Show” button. Selection of date, similarly to other filters, applies both to the map and to the calendar. This tool enables to retrace Ukrainian communities’ unification process in time (starting from 25 October 2015). 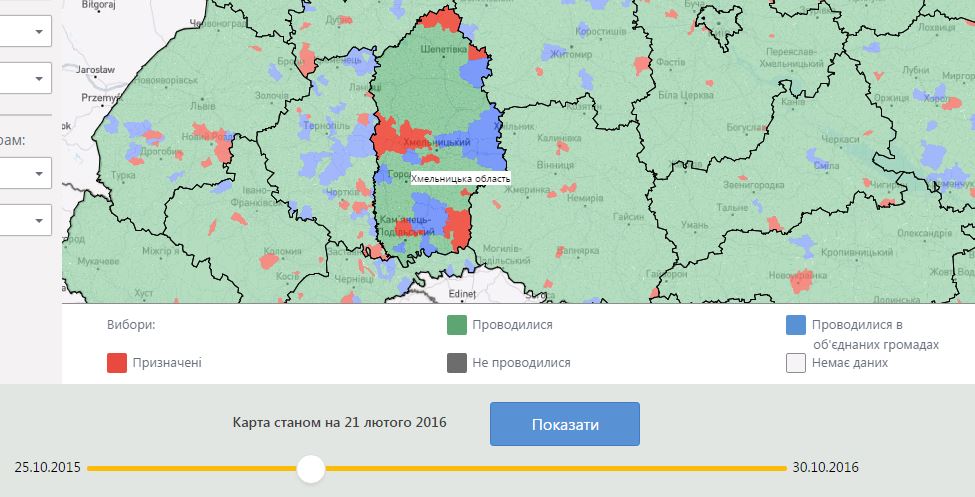 As a result, site navigation leads to “community profile” – information on a specific city, town or village community – what elections have already been or will be held there, who has been elected (given that such data is available at CEC web-site).