The list of elections scheduled for December 2016 is available on the website «Local Elections In Territorial Communities» (www.info-vybory.in.ua): all elections in territorial communities filtered by dates and oblasts.

Geography of elections to take place in December can be seen on the interactive map on this very website: Peculiarities and Challenges of Election Process in Local Communities

Elections in Ukraine take place almost on a weekly basis: predominantly members of village, town and city council and amalgamated community government bodies are being elected.

Since regular and first elections in amalgamated territorial communities on October 25 and by the end of 2016 as of today 1896 repeat votes and elections were scheduled in different communities. Most of them concern election of deputies to local councils. Some of them have failed to elect the full complement of the council ever since the last scheduled election. For example, Ochkyne village council (Sumska oblast, Seredyno-Buds’kyi rayon) has failed to elect deputies in all precincts at regular elections on 25 October 2015 whereby scheduling the repeat election (which has failed to elect deputies as well). Altogether this council has already held 8 unsuccessful elections and scheduled the ninth for 13 November 2016.

(this information about this community can be found on the website, if the date slider is set, say, for 2 October 2016.)

Even if voters will elect deputies this time, citizens from this village council will need to return to voting stations in December again as far as Ochkyne village council was amalgamated into Znob-Novhorodske town community first elections wherein are scheduled for 18 December 2016

There are councils which outrun Ochkyne by the number of attempts to elect its members. Thus Velyki Budyscha village council (Poltavska oblast, Dykanskyi rayon) will be holding its tenth re-election on 27 November 2016.

The high frequency of local elections is also affected by the process of territorial communities’ amalgamation. Due to the voluntary character of this process it becomes quite durable. According to the effective law the amalgamation of a community is followed by first elections to choose the council and the respective chairman. Thereafter the newly elected council begins starosta election procedure. Should other councils decide to join already amalgamated community the process repeats all over again – first election of a council and a chairman followed by election of starostas. We already have such an example – Kutsurub village community (Mykolaivska oblast, Ochakivskyi rayon). Last year it was formed by amalgamation of two village councils and has successfully held elections of the council, chairman and starostas on 25 October 2015. However a number of other council decided to join it this year and now first elections there will be held again on 18 December 2016 but on a larger territory. Recently the Parliament in the first reading has adopted the draft law №4772 simplifying the council accession procedure to amalgamated communities. Should it be passed by deputies there will be no longer any necessity in the recurrent first elections.

However newly amalgamated communities ranked as village or town retain the problem of the respective former councils – unsuccessful election of deputies in some precincts and repeat elections thereto. Thus Nova Ushytsya town council (Khmelnytska oblast, Novoushytskyi rayon) since 25 October 2015 fails to elect all the members of the council.

In view of the aforesaid specific features and problems with electoral legislation reform it would be advisable:

Website «Local Elections In Territorial Communities» was developed in order to provide, in convenient and accessible form information about local elections in Ukraine, and, in particular, on elections in the new amalgamated territorial communities since 25 October 2015.

The information is based upon the data from the Central Elections Commission web-site and is updated in the course of appointing and holding of local elections.

Website was developed by Ukrainian Center for Social Data within the framework of “Developing Election Training Capacity and Enhancing Voter Awareness” project, implemented by OSCE project coordinator in collaboration with and by the demand of the Central Election Committee and supported by the Ministry of Foreign Affairs, Trade and Development of Canada, the Norway Ministry of Foreign Affairs and the Government of Denmark. The web-site visualizes information on where, when and how the elections in Ukrainian territorial communities have been or are intended to be held along with, among others, reflecting the temporal dynamics of territorial communities’ unification process.

Leave your e-mail to periodically receive our news. We promise not to spam. 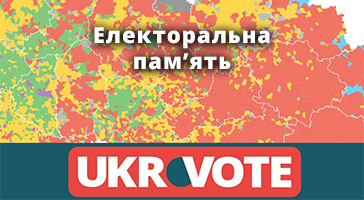 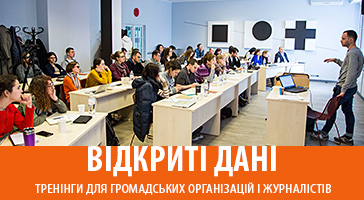 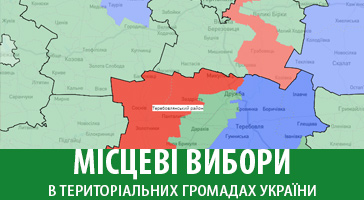